Even though lately a great deal is spoken about the upsurge in the dry bulk freight market and about its future direction, much is and will be determined by China’s and India’s demand growth for dry bulk commodities, specifically iron ore and coal.

As a start, it must be stated that the local Chinese steel production has proved to be very resilient to date in 2019 (amidst the ongoing trade war with the US). The Chinese government has really reinforced the infrastructure and construction investment in order to counter the negative effects on jobs and growth of the manufacturing sector, resulting from the aforementioned US-China trade war. Chinese crude steel output hit a record high this May of 89.09 million tonnes, as per the Chinese National Bureau of Statistics. The latter happened despite an increase in raw materials prices (iron ore specifically), which in turn reduced the profit margins of steel mills.

However and during the same time period (the first five months of 2019), China imported 423.92 million tonnes of iron ore, 5.2% down from the quantity imported last year during the same time period, as per customs data. This is mainly due to the iron ore supply constraints in Brazil (and- at a lesser degree- in Australia), as well as the skyrocketing price of iron ore. Iron ore prices have reached the highest levels of more than 5 years due to the severe fines burdening the prices of iron ore imports to China. To cut a long story short, the above leads to Chinese steel mills switching to lower grade iron ore (of 58% content), either as imported from Australia, or produced from domestic Chinese mining or even to the use of converted steel scrap.

On the other hand and regarding the second major dry bulk commodity of coal, the 1st quarter of 2019 witnessed coal being the fastest growing major commodity worldwide. Coal commodity trading enjoyed a growth of 7% to over 310 million (in 1Q2019) compared to the same quarter of 2018. Apart from China and Japan, India as well as other countries of South East Asia or the Subcontinent had a great increase in coal imports (due to the countries’ local economic development).

For the same time period (1Q2019 compared to 1Q2018), India noted the greatest growth of 14% to over 56 million. India will likely rival China again as the 2 greatest coal importers of the world. The good news is that India is not only importing more coal, but also it is doing so from further away (hence increasing the tonne-miles for the dry bulk carriers). The latter takes place without shifting the demand to bigger dry bulker sizes due to the Indian port restrictions. Thus, the same amount of demand applies for the employment of Supramaxes, Panamaxes and Capesizes and so all 3 sizes are served well.

The following charts illustrate the aforementioned data for India. 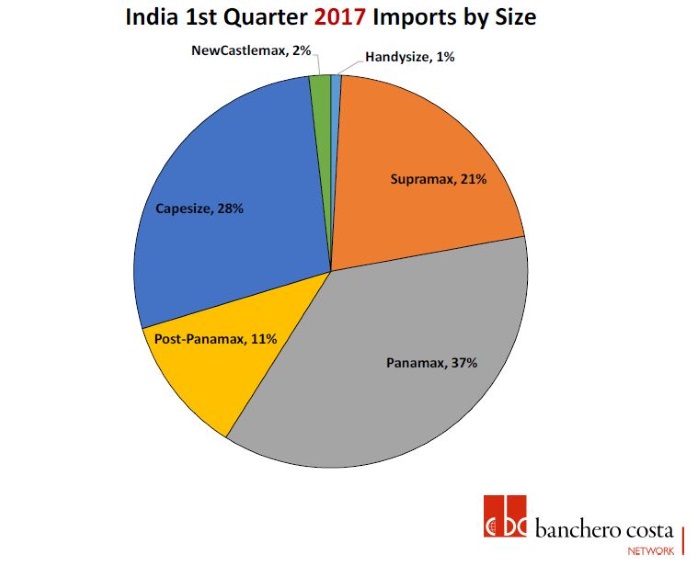